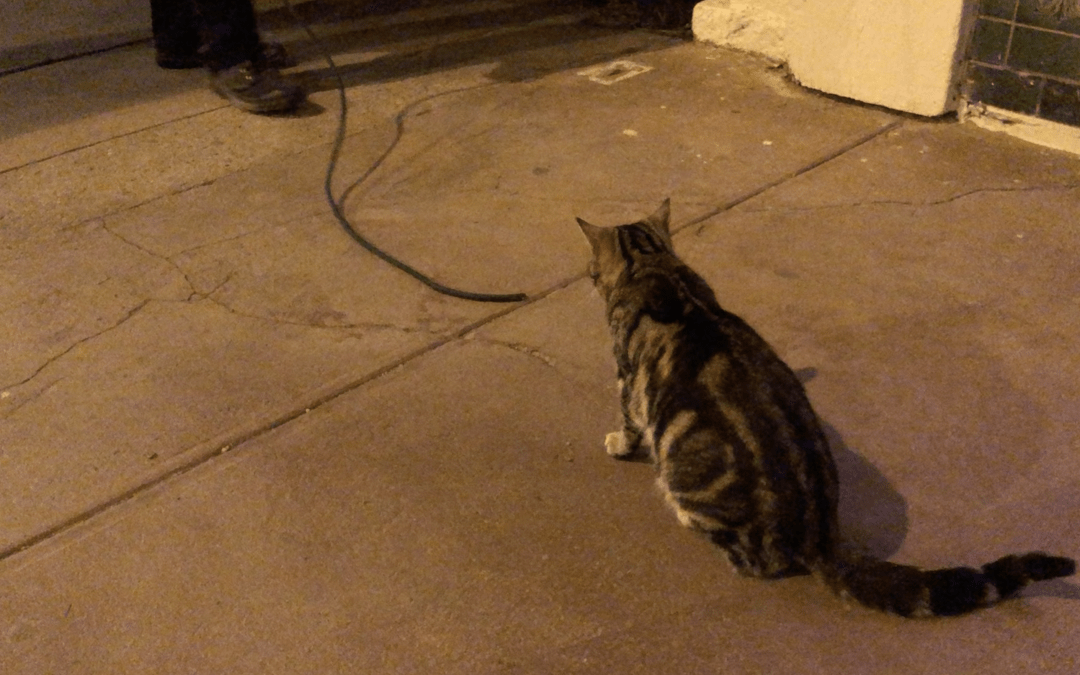 Andrew playing with the wildling cat, Esmerelda, about half an hour before he was able to catch her.

She was a wilding, living in the main street of Braidwood, our town in rural Australia. She took refuge  under the footpath drain,. and that was where I spotted her as another woman fed her a vegetable pie from the bakery.

Scared, hungry, incredibly wary of humans, the wildling cat quickly realised she was on a good wicket and made her home there, with the street flower garden to sun herself in, and the hole in the building from the little alley between the crystal shop and the bank making a good hiding place and shelter from the storms.

Several of the town’s women opened their hearts to her, and when we made it into town, it was to find cat dishes and water lining the alley. A beautiful coming together of hearts to care for an innocent in need.

Wouldn’t it be beautiful if every human came together in community to care for those in need, freely, with an open, giving heart.

This is what is needed today, instead of kill shelters and the violent solution of culling, 1080 baits, and hate.

There was so much danger for her, which the cat I named Esmeralda, seemed oblivious to. She charmed so many in the street. But there were those who worried she would get hit by a car and those who just wanted her gone.

She walked into my dreams. More than once. She refused to be trapped. But she and I both knew she was coming home with me.

And then one day, Andrew and I were driving back from the coast together with the grocery shopping. It was my job to feed her that night. As we pulled in across the road from her special place, I saw her streaking down the footpath towards it. And when I got across the road, she looked me in the eye.  Tonight was the night she would come home with me.

I hoped.  It was school holidays coming, and this town was a popular stopping place for those headed to the coast. She was savvy and smart, and knew how to avoid people’s hands and cars and dogs.  But I could feel her tension too. Would she come to safety tonight?

I started playing with her, and Andrew pulled out his horseman’s string and played a chase game we play with all the cats at home (see the video above). After about an hour and a half we had built trust with her. He grabbed her. She reacted like any wild cat and sunk her teeth into his hand. I could feel the shock coming off both parties.

There would be no trap for her. Andrew cuddled her into his thick padded denim jacket and she settled there. Man and cat stepped back into the car and off we went. At home, Tamsin got the new cat enclosure ready with blankets and toilet and food, and the most important thing, a heater.

And after a little while I found her cuddled into the blankets near the heater, closing her eyes in delight, communicating with her eyes. “I’m home.  I’m safe. This heat is amazing.”

When we bring new wildlings, they live in the enclosure for a little bit to get to know the other cats and dogs and how humans operate. We cover it with blankets or towels  so they can relax and feel hidden and safe at night. And then we remove the covers to about half the hutch to give them more of a chance to see what’s going on. Still safe to eat, but plenty of room to meet everyone and check out the situation.

We find this is the quickest way to integrate new wildling cats.

Esmeralda is settling in really fast, has learned to ask for food, met all the cats and dogs, and just loves being warm and cosy when the temperatures drops at night.

She’s not shown any interest in leaving her enclosure yet, even when we leave it open for her. She has accepted being stroked, is curious, and learned about kitty litter trays.

She has also fallen in love with the other (formerly) wild cats who live in the house and have taken to sleeping on the top of her enclosure, especially Mama Baast, who takes care of all the newbies in her maternal way.

It’s kitten season right now and wildling cats are simply homeless cats who need humans to care for them.  If Esmeralda is pregnant, we will keep her children with her. Because that’s the right thing to do. And we’ll get her desexed, even though she’ll be an inside cat .

It’s time to stop the suffering on this planet, and for communities to come together and look after animals in need. Imagine a world where everyone knew there was a network you could rely on to take care of you when the chips were down.  Imagine a world where every animal knew they were safe, and humans realised they were co-inhabitants and stewards instead of seeing other animals as problems and pests.

So let’s start now by taking care of the homeless, the troubled, the vulnerable, the hungry.. of all species.  Keep families together.  Make the world feel safe again.  It’s up to us.

Deep Peace Trust is a social change organisation working for peace and safety for all species, changing the culture to a kinder, less human-centric one through teaching ancient shamanic traditions, modern heart-centred wisdom and writing stories which show this different realty and way to be. A beautiful world can be ours, if we step into who we are meant to be.

Donations to the charity all support the Trust’s sanctuary— the largest farm animal and wild horse sanctuary in Australia. Please donate what you can to keep our animal work going.