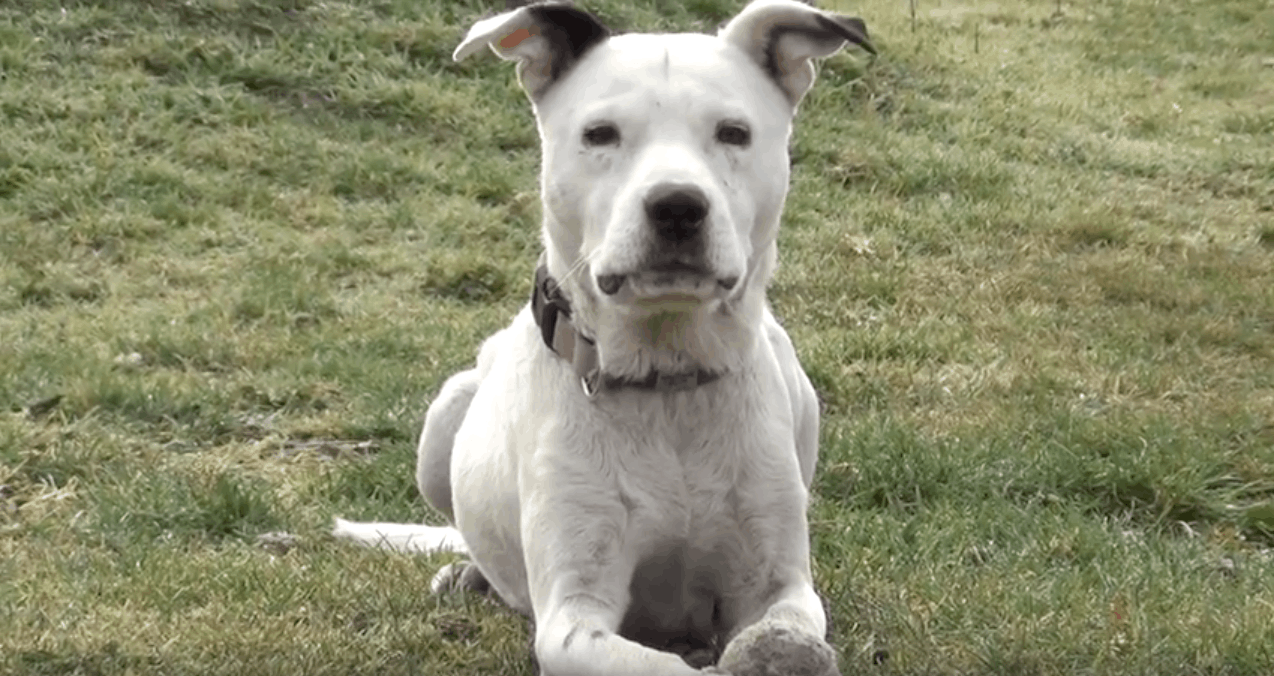 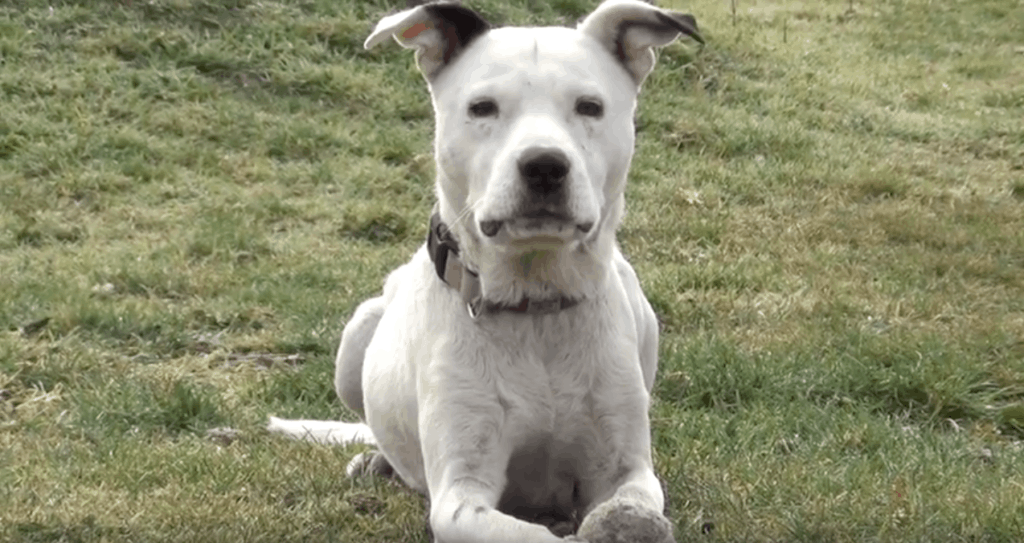 I said yes to Marley’s subtle, desperate call for help without even seeing him. He was scooped up into our loving care with a large collection of cat people from a Sydney Pound on D Day with absolutely no time to spare. A little, white, smelly staffy with food issues and the worst skin condition the vet had ever seen, he bounced into our lives in March 2013.

An outside dog, we had to toilet train him at his older age, but he quickly adapted to soft couches and cosy dog beds. With a good diet, we changed him from repugnantly smelly to as beautifully earthy smelling as our other dogs. His coat shone, and every now and then we got his skin condition under control. Throughout all this, he was cheerful and sunny, eager for his daily meals and grateful to be part of a family where he was safe.

Marley had a huge “I’m not good enough,” underlaid by fear. Despite his brave aggression around food which had him eating by himself  at meal times, Marley went through a long stage of being the underdog in the pack. It was something  I really wanted to help him with. Despite his slowness in later years, I made sure he got to come for walks with the other dogs. He really didn’t enjoy car trips or even rides in the car to feed out hay. He preferred to potter around the yard and be close to the pack den—our old cottage.

He had a deep fear of being thrown out and lost to fend for himself again, eating what he could to survive and not welcome anywhere. Like people, some animals find it hard to let go that old story.

He was so cute and sweet and had a valuable role in the family. He was foster mum to the inside lambs and goat kids who adored him, and would curl up with him by the fire. I wanted him to be our PR guy, or one of our Peace Ambassadors. But he didn’t want that. He wanted to remain hidden behind the mists, to heal in sacred sanctuary. So we honoured that.

Because there were so many little things wrong with Marley’s health, he got more than his fair share of fussing over. He got special foods and supplements, the holistic vet for acupuncture, and loads of herbs, homeopathy, baths and oils.

It was in March 2018, just before the full moon and after a heavy dose of solar flares, that he told he couldn’t hang on any more. He said he was leaving and he didn’t want to be alone through the process. I stopped everything I was doing to sit with him and hold sacred space.  For as long as it would take.  A natural transition can be a time of incredible healing and depth of connection and I knew this is what he wanted.  So I made sure I never left his side, joining him on his then current bed on the couch in the living room at night.  That finally healed his “I’m not good enough.” He was worthy of our full attention. Of course he was. It was so important he felt safe and loved. At peace.

We made the living room a cathedral of sweet smells and candlelight.

He pottered about the yard and I sat with him in the shade. When he wanted to go in, we carried him in. When the restlessness which is a part of natural transition came, I helped his body potter about. And in between, we did so much healing—not to bring him back or effect a cure, but to clear out the old patterns holding him back.

When he came into consciousness nearing the last leg of his journey, sitting up and staring at me with so much gratitude and love in his bright, dark eyes, I stared back, absorbing the hit to my heart, which made me realise once again why we do what we do. That moment was worth everything. That was his goodbye.

He had told me he was leaving so the dog he couldn’t be could come into my life. I told him we’d had more than seven dogs in the past. But he insisted. We talked more about that. He was ready. And when the room filled with the spirits who come for those crossing over, I realised who he had been waiting for—his mother.

“I am so grateful to you,” she whispered, as Marley’s body took his last breath, his spirit already  with her.

The room was empty then. And now there’s someone missing from the pack of black, brown, and gold. There are only six dishes at meal times.

I like to clean after a major passing. I guess its about changing the energy of spaces, clearing them of death, and bringing new life into them.

But no one else needed little coats and jackets to keep them warm during the cold nights and days here. I folded them all up with tears in my eyes. Marley won’t be needing them any more.

@Billie Dean 2018. Billie Dean is a writer and animal shaman, who founded the Billie Dean Deep Peace Trust working for deep peace for all species. With her family, she runs the Deep Peace Farm Animal Sanctuary, A Place of Peace.