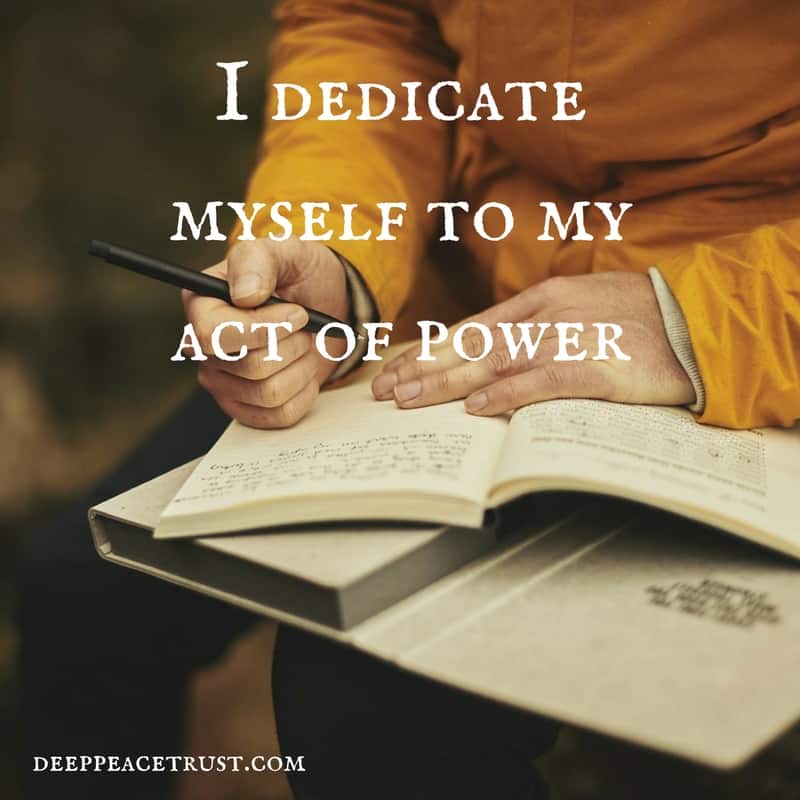 When I was studying with shaman and author Lynn Andrews, she had us intend to do an Act of Power. I found the idea a really useful one for getting on track with your deepest desires, and soul purpose.

My Acts of Power

I have made two acts of power in my life — my first was Finding Joy, my feature film, which I produced, wrote, starred in, directed, and distributed. I put this ahead of all the plays I did the same for, because this was harder. It took so much focus. I did, however, win a small Best Actress award. And even though it didn’t provide me with the golden key to the film industry that I had hoped, or provide me with much cash, it did touch the audience we managed to get it out to. It was also the launch feature for the Spiritual Cinema Circle, and thus seen by people in 60 countries across the world.

Secret Animal Business is not a bestseller, but it did (and does) change people’s lives, and the story with it is not yet over.

My third act of power, which I’m working on right now, is to crack the money code. Now, this might seem shocking for a spiritual person to get all focussed on something like money. But to me, abundance is part of one’s spiritual evolution. And money has never been something I have been focussed on before. It was always the compassionate or creative act which came first.

So this act of power is about spiritual mastery. It’s about reaching and holding the high vibrational state of peace, as well as the authority and laser-like focus to take my creative career to the next level. I want to touch more people with my stories, and thus contribute to a greater shift.

And I have to do that from home, while still maintaining my main job as medicine woman, anchoring the light and ensuring the peace at A Place of Peace. So, no going to Hollywood.

The hundreds of animals in my care believe in a benevolent universe to the extent that they manifested me to save them, and ensured that they never missed a meal in the darkest of winters.

I have been very focussed on making that happen for them. And that took belief, faith, work, and money. It was thousands of dollars a week out of our own pocket. An act of power in itself.

But our human family hasn’t done so well. We live extremely humbly, and sometimes only on faith in the bank account.

So for me, having a sanctuary, a village of 450 souls, has become a spiritual teaching on its own. It is forcing me to look at where the holes are in my own consciousness. And how holding the vision of what I want, and not what I have, is a real act of mastery.

Years ago, the fae asked me to embody the archetype of the Queen. It made me very uncomfortable. Me, a queen? What a joke. But later I came to understand that to be the queen of little Avalon involved a deep and sacred connection between myself, the land, the animals, and the material and etheric worlds. It was their way of helping me turn my wounds into diamonds. It was an initiation to a greater becoming, of holding a greater vision of myself, to really connecting with the Divine within.

Once I crack that code within myself, it will activate what I need for the village, including the humans, to thrive in the way I know it can.

One of the tools Lynn passed to us was the Time Magazine process. Figure out more of your authentic you by Seeing your self on the cover of Time magazine. Why are you there? What do you want to be known for? What legacy will you leave? What’s the title that goes with your article?

When Andrew did this, it was simple. He wanted to be an author. After over 100 children’s books for the education market, he is finally writing the story which is stalking him. He is unleashing his creative genius, and he lights up whenever he talks about it. So his title might be something like: “Author Andrew Einspruch — Delighting Millions.”

I had to really think about what label to use for myself on Time magazine, as I love doing so many things. “Visionary filmmaker” was what hit the sweet spot for me. So there is my next act of power, intertwined with achieving that high vibrational state of peace. “Visionary filmmaker Billie Dean — Inspiring Millions.”

Another popular way to frame it is to really think about what you would do with your time if you had all the money in the world.

If you didn’t have to work, and you had all your needs met, what would you like to do?

The way to find this truth for yourself is to see where what you are saying resonates? Do you really want to be the nurturing one or do you want to dance? Remember what made you light up when you were a child, all giggly and excited? That is where you want to be. Do you adore animals and just want to hang out with them, or love to sit in a cafe or cosy nook and write? Do you want to teach others and get a real buzz out of seeing them light up? Dig under the surface.

Do you just want to sit at home, garden and journal, be creative, enjoy playing in the rain, and cuddling your animal companions.

I soon let go of Academy Award dreams when I realised the lifestyle seriously wasn’t what I wanted. My animals and human family were more important. Fortunately today, one can make and distribute films in other ways.

When Andrew and I first got together, he was studying for a PhD in computer science. He would go to university almost bent with the weight of it. At night we did improv comedy. He would light up and own the stage. He ditched the PhD and didn’t look back. Now he is using his improv skills to write a novel that will delight people. And that is what lights him up today.

Take your memories from Day 1. Write a list of the things you loved to do, and run down that list with your feeling self. Which ones make you smile and light up?

Imagine your self on the cover of Time magazine. What’s written under your picture there? Don’t think. What’s the first thing which comes to mind? You can think about it later — but write down what your subconscious came up with. It might surprise you.

What is your act of power going to be?

And remember, what the world needs is more people who light up because they are doing something that is fun for them, something they are passionate about. Their frequency is high, and that shifts the collective. I know for many students here, changing the world is a passion. But with that passion comes the unease of all that is wrong.  The world hurts, so you want to make a difference. But let’s shake it up. If everything was right in the world, what would be the most fun for you to do? Maybe you just want to travel and explore, or study, or be like a cat, sitting in the sun, listening to the voice of nature.

Maybe your Act of Power is summoning the courage to do what your heart (and Higher Self) is calling you to do.

The more you can do the things that make you really happy, the quicker you will see a healthier you and a healthier planet.

Have fun with this.