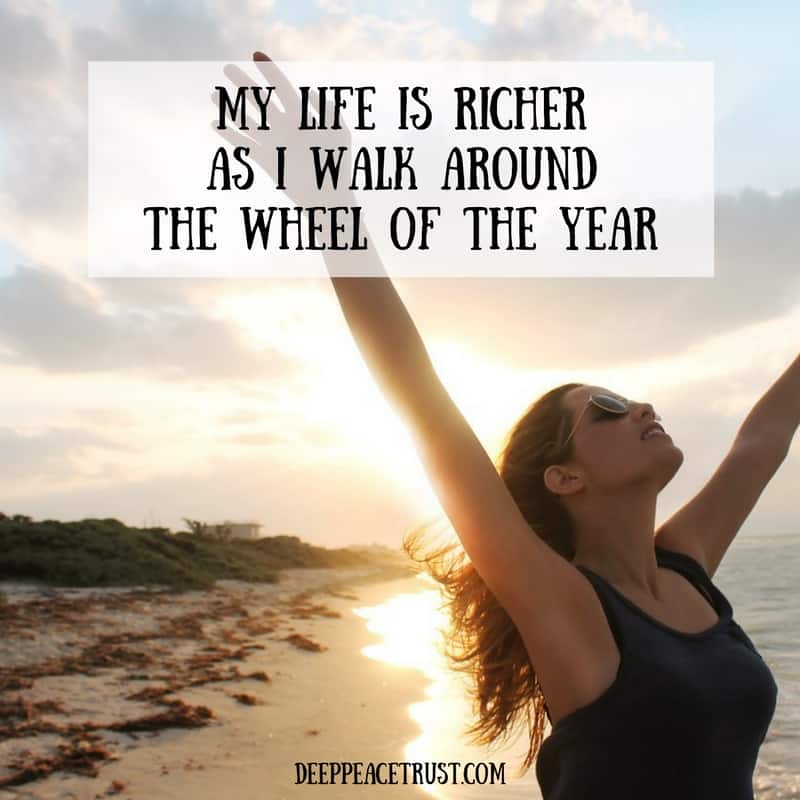 Wheel of the Year

If time can be a circle, we can look at life as a wheel. People have become so removed from nature and the natural cycles of life in our modern world and if we want to re wild, getting back to some ancient customs which mark the natural cycles might be a good way to go.

Honouring the  Wheel of the Year is something we can do to weave those ancient threads back through our modern shallow life, making it richer and more meaningful. It anchors people back into a more nature-based life, beyond today’s glittery commercialism.

The main events on the Wheel Calendar are the solstices, equinoxes, Samhain, Beltane, Imbolc, and Lughnassagh. Most of these were celebrated as festivals honouring the harvest or the land.They brought the community together on one level, and on another level they were potent times of change when the veil became thin and secret portals or gateways opened. At certain times of the year, it was said to be easier to contact the fae and the dead.

Sensitives, when aware of the potency of these times, can feel the world shift as the season turns,  the veil thin, the unseen presences even more available. These are times of magic, mystery and wonder. One might even view them as a sacred, secret language.

This is why the prophecy of peace marked the December solstice of 2012 as the turning point for the new era.

To win the indigenous Celts over to their religion, Christians simply sat their festivals on top of the original, and today they are just watered down commercial materialism.

Instead of Imbolc, we have Easter, which is a wonderful way to get children addicted to chocolate!!

Instead of Samhain, we have Halloween, which is a commercial trick-or-treating (more sugar) that even southern hemisphere Australians think is cool, while completely disregarding the true, seasonal meaning. But then, hey, it’s a fun party, and I know many people in the southern hemisphere who simply celebrate Beltaine in all its majesty and consider Halloween as an opportunity to start a conversation about the true meaning behind the costumes and sugar.

Instead of solstice, we get Christmas, which, for most, is a far cry from the meaningful family gathering the advertising campaigns all make it out to be. Increasingly, it has become a time of social isolation and suicides in our upside-down culture. It’s become a time of material excess. And yes, there is now a backlash and a trend of people giving more meaningful gifts and to charities and so on, which s wonderful. I actually love the true spirit of Christmas, but Andrew and I used to hold Boxing Day parties when we lived in the city for all the people who needed to debrief after shattering family gatherings. Or for those who had no family at all.

These days we simply celebrate solstice as our family day, and Christmas as a beautifully quiet day off.

The Celebrations on the Wheel

So how we can we make these family and community celebrations more meaningful? Can we wind the thread of the ancient rhythm of the year into our own lives, and that of our community?

Let’s start with winter solstice which is around Dec 21 in the northern hemisphere and June 21 in the southern, that is, in the heart of winter when the night is the longest in the year. The time of the most dark of the year. The day after solstice, the dark loses its grip, and the days inch toward increasing light.

The solstice has been recognized as an important turning point in the yearly wheel since the late Stone Age. The ancient megalithic sites of Newgrange in Ireland and Stonehenge, in England, carefully aligned with the solstice sunrise and sunset,

The Druids call Winter Solstice Alban Arthan, “The Light of Arthur.” it could be Arthur Pendragon, or it could relate to the star constellation of the Great Bear, Art being Gaelic for Bear.

But for the depths of the bleak and cold, the shortest day of the year marks the Return of the Light. And you can see the implications of this for doing positive activism. The Light Returns! Wahoo!

To celebrate, evergreen was brought into the home — pine and holly, which has magical implications of its own.

One ritual we love to do in our home is to turn off all the lights and sit in darkness for a moment, really feeling the dark and understanding that it doesn’t have to be fearful, because there is always a light in the dark. A dark night of the soul doesn’t go on forever. The light always returns.

Then Andrew or I, as the Elfae Elders, light a candle saying, “The Light returns.” And everyone else lights from that one candle, making the same statement to the universe with joy in their hearts.

Imagine if everyone focussed on the Light returning!

Next up is Imbolc — the first sign of spring, in the northern hemisphere, it’s February 1st, in the southern its August 1st. There’s new growth and it is a good time to start thinking of spring cleaning and cleansing, and launching new projects into the world. The Celts would honour Brigid, one of the Tuatha de Daanan. And as she is the goddess of the hearth, metal working and poetry, it’s a great time to invite her in as a muse and to help you care and protect the sacred sanctuary of your home.

Ostara is the spring equinox. This is one of the two times of equal day and night, a powerful turning of the season.

Beltane is a festival of Light! Traditionally, it is an open gateway for three days and nights with a very thin veil and a time when the fae were about, Beltane was a fertility festival with humans enacting their own fertility rites to encourage the fertility of the land (we are all connected) So it’s a good time for some earthy romance, dancing barefoot to connect with the Mother, and thank Her for nourishing and nurturing us, with gifts to her in return, such as a beautifully presented fruit cake! In the Northern hemisphere this was traditionally celebrated April’s end and with May Day.  In the south, its at the end of November.to Dec 1 –ish.  You can feel it.

The summer solstice,  (midsummer) is another potent time for the fae. It’s a time of celebration, feasting, partying and the longest Light of the year! The Druids call it Alban Hefin — “The Light of the Shore.” The seashore is an “in between” place, one of the thin places between the worlds, hence this thin time of the year being respected and recognised. Because it is at the thin places and thin times that the fae can most easily be seen or contacted.

Shakespeare knew this when he wrote A Midsummer Night’s Dream.

According to my fae guides he was a “friend of the fae”.

Druids would gather (and still do) at special places like Stonehenge and Newgrange to greet the dawn, and it’s a good time to find your special place and greet the dawn with a drums, rattles and bells (the fae like the bells) to say thank you to Grandfather Sun, to feel the earth beneath your feet, and to honour the fae who like you to dance, sing and make merry with food, laughter and music. Also a good time to honour them with special cake, fruit and apple juice. (Never offer alcohol or animal products.)

Lammas/Lughnasadh — the Irish celebrated Lughnasadh after Lugh, another of the Tuatha de Daanan. It’s a harvest festival which is also called Lammas by some traditions  Held  at the end of July or first day of August in the north, and February 1st-ish in the south).

The autumn equinox is another harvest festival, but also a time when the veil is thin, and when there is balance on earth — equal day and night, equal dark and light. It is a time of harmony to take stock, reap the harvest, put away stores for winter and start slowing down to go inward for the winter reflection period, which one might spend creating.  This is March 21-23 -ish in the south and September 21-23 in the north– whenever the day and night is equal

Balancing the light of Beltane, Samhain celebrates the dark. It is a time of the thin veil, a crack between the worlds, when the ancestors can be contacted more easily. It is a time for honouring your ancestors, elders and those loved ones who have passed. It is a time for messages and divination.

We always set an extra place at the table, and are always delighted to see who turns up. My dad is a regular visitor, as are Andrew’s grandparents. And it is a good time to cleanse and renew your ancestor altar.

This is at the end of October in the North and at the end of April in the South.  You can see it is a bit different from what is now being called Halloween,, All Hallows Eve.

So that’s a very short overview of the sacred Wheel of the Year. I want you to begin to understand there are sacred times which can be observed and used for extra potency to the impact we make in the world, and for extra connection to the unseen and to the natural world. By honouring these observances we get into a rhythm of spirituality which can nourish both us, and if we want, the wider community.

Mark your calendar with the dates for the wheel of the year for the next 12 months, and at each point spend some time celebrating it your way. One Druid mentor would go to a rough cabin in the woods at each point, and fast on apples, getting back to the balance of a simpler life, listening to and observing nature and the unseen.

Others invite groups, circles, community or family to join them at these special times. There has been a resurgence of the Winter Solstice Festival in some places, for example.

So whether you throw a party or simply light a candle and leave an offering, just try and spend some time observing the Wheel, honouring the ancient ways, and weaving another spiritual thread through your daily life.