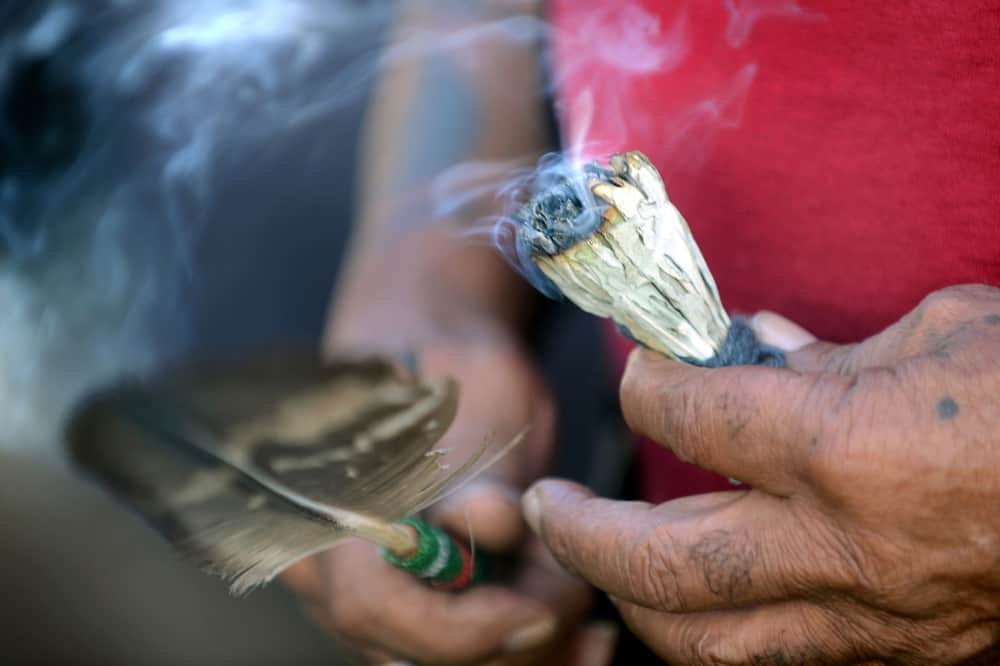 With your increasing sensitivity and growing awakening, it’s important to remember to keep energetically clean.

I once met an Aboriginal Elder who smudged every day. She said “stuff” came in with everything. So whatever gifts you are given, or things you have bought into the home— smudge it for cleansing and purification.

Smudging is cleansing one’s own auric field or home or things by burning herbs — normally dried sage, commonly found today in New Age or health food stores. It was the custom of the Native Americans to do their spiritual house cleaning this way, also using sage for purification, healing and ceremony.

Sage was used by the Native Americans because the plant was local to them. This practise is found in many cultures — each using a a plant or ingredients local to them.

This particular Elder found that sage didn’t cut it for her personally. She used European wormwood, even though she was Australian Aboriginal. The people indigenous to Australia will use a few different things, including eucalypt leaves.

In South America burning palo santo is common, and among the shamans, a good spit with their spirit water is enough to send any ghouls flying.

I personally find sage really works for me.

While I went through one of my many initiations with the Spirit folks, a tribe of Native Americans called me to visit them daily for about six months.

They lived 500 years ago and I was a young medicine woman there. Andrew was also there — as my warrior husband.

I would go on a shamanic journey to the drum, visit and learn, and then return home to this reality to journal and integrate the teachings. The veil was thin and I was weaker than normal, having a bout of severe adrenal burnout and Epstein Barr virus. One night a young man from the tribe broke through the veil and tried to kill me while I was sleeping. I woke up, realising it was a real battle. I was fighting for my life with this etheric Native American warrior. I had the presence of mind to ask Andrew to smudge me, and that is what protected me. The warrior wasn’t able to penetrate the sage smoke and drifted off, never bothering me again.

I had a lot of respect for the spirit of sage after that.

I keep my healing room very energetically pristine. I smudge before and after a client session for purification, and to clear away all the lower thoughtfoms of illness and so on that have come into the room through the client healing.

Smudging is also good to do before you go into an important meeting or event if you want to be energetically, and thus mentally, clear. Keep the home a sacred space by smudging often, and especially after illness or arguments.

Arguments will leave an etheric toxic residue — so it is great to get rid of them with sacred smoke. I have even Seen the outline of people left in a room after a domestic of some kind in my work as an animal communicator (yes, the animals pick it up, are bothered by it, and show it to me if their people need to do some house cleansing!).

I like to smudge the body of an animal who has passed before they are buried. Note that sage smoke can be very heavy and thick, and can be uncomfortable for many animal beloveds. So be careful. Pay attention. Don’t force them to endure it if they don’t like it. Some of them put up with it in the house, but don’t want it too close to their bodies. Palo santo is a much lighter smoke. Or you can clear them using other methods, like a bath of seas salt and baking powder. (Read on!)

Smudge the home before and after guests.

Smudge all items brought into the home.

Smudge after life changes, like a job change or beloved passing. Even a life change that is happy has the potential to cause stress and sadness, simply because it is change.

Smudge to purify yourself before any ceremony. Or before you walk onto sacred land.

If you have been out in the world, it is great to smudge before you enter your home. We used to have students who would smudge before they entered A Place of Peace.

It means you keep your home a sacred sanctuary.

And in sacred places, it is good respect to enter the space having purified yourself.

Smudging will change the energy of things and places. When we first bought Owl Cottage, the old part of the kitchen had a terrible energy in there. So we smudged it and purified it until it shifted.

Another way we used this purification tool was with a carved wooden owl we were gifted because he wasn’t selling in the shop where he lived. And no wonder. The poor guy was really cranky. He exuded a terrible energy. So Andrew and I smudged him and smudged him and smudged him. Until he shifted. Then he began to look happier and more vibrant. His whole being shifted. He even looked like he was smiling.

Further science is now proving that there are health benefits to smudging the home with sage. Not only does it help purify the etheric but helps with the cleansing of bacteria and viruses.

By clearing away the old or negative energy you open your space up to a higher frequency for healing, harmony and balance..

So how do you do it?

Different herbs have slightly different purposes, but the most common available for purification is white sage.

By regularly smudging and purifying yourself and your space, you will be more able to keep your centre in a world that is in the process of turmoil and change. Your home, for example, can become a healing sanctuary, not only allowing transformation, but keeping you centered and calm in a time of chaos.

A quick way to cleanse off the day out in the world is to have a shower with a hand made scrub of baking soda and sea salt. Rinse off the scrub and feel how clean and tingly you are. Make sure you rinse off! I also do this with dogs and cats from the pound when they first come. I give them a bath with the normal soap with added baking soda and sea salt, and then rinse off, and a final rinse with soothing lavender oil.

I make a habit of never wearing worn clothes after a shower, because I don’t want yesterday’s energy. Into the wash they go.

One way of approaching life in this sacred manner is to smudge on house cleaning days. After the house has been physically cleaned, light the smudge stick and when it is smoking, bath yourself in the smoke, running it over your head, and down your front and back, using your hand to direct the smoke.

Some people like to open the doors and windows, and others leave the windows closed, with just the door open, but you will sense which way works for you. The idea is the lower energy must leave the house.

As you move around the house with the intention to purify, ask all lower energies to leave, gently smoothing the etheric “feathers” of the air around you. They aren’t feathers, but that is the sense of the intention. You can do that anywhere without smudge, to calm the etheric around you. It goes from thick and dense to clear and light when you do this. Just smooth the air around you as if you were smoothing the hair on an animal you loved. You will notice how thick and dense the air can be in some places, and how free and light it becomes when you tend to it.

When I do a big ritual smudge, I’ll wind the two techniques together.

Walk around, moving the smoke with your hand or a found feather, clearing the ruffled feathers of the air at the same time as letting the smoke do its work. Especially around doorways, windows and corners.

Once you have completed your round of the home, room, or the object you are purifying, and pushed the energy all out the door, take the ash outside and return it with thanks to Mother Earth.

If you are clearing the house of spirits of some sort, salt along the bottom of the door with Himalayan Salt with the intention that they don’t come back in.

An Aboriginal Elder once gave me a cleansing plant to purify my home with, and we all felt Aboriginal presences who weren’t normally making their presence known!

Another good clearing and purifying herb is myrrh, which is often used in India. Take the sticky resin and burn it in a charcoal Incense burner, and once it is alight, let it do its work. Another way I have used this is in the fire. I pour a little onto the logs, knowing the smoke goes up the chimney taking my prayers of purification to the four winds around the property. That is the intention I declare.

After cleansing, you can raise the frequency of your home still further.

Burning sandalwood and frankincense after the myrrh is a good way to make a sacred offering and raise the frequency. I burn these offering divine love and deep peace to all the good spirits and higher frequencies in the home.

I will also use bells and Tibetan singing bowls to lighten the energy and anchor in this light. The faerie love the bells.

Others use rose incense or rose oil because that is such a high frequency. You can also refresh your Spirits of Place altar, or use other oils to tickle your senses and make you feel good.

And then there is the high vibration of music and laughter!

The Fae have always said it is important to keep our homes of a high frequency at the moment, because it helps keep the light shining when the swirling mass of negative emotion threatens to engulf us.